Muammar Gaddafi was shot and killed. His body was taken to Misrata to the west of Sirte, where a doctor’s examination disclosed that the deposed leader had been shot in the head and abdomen.  It was decided to keep his body “for a few days”, NTC oil minister Ali Tarhouni said, “to make sure that everybody knows he is dead.”  To that end, the body was moved to an industrial freezer where members of the public were permitted to view it as confirmation. 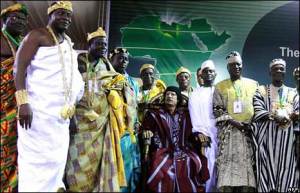 Go back in time…. Imagine this scene:

President Obama, gets off his plane in Mozambique – and decides to take a trip around the country, supported by his own bodyguards.

The fancy bus rolls through small village after village; each time the President gets off the bus, he strolls through the village surrounded by his entourage, a mix of bodyguard muscle and a few beautiful women as tokens of his power.  After all he knows how to read Africa!

Then as he passes people on the street of each very poor village, he dips his hand into a basket, and doles out $100 bills to each and every person who he passes.  The $100 is a small fortune to the grateful recipient.

He asks the Village Chief: “My brother, what is your most dire need here in the Village?” The Chief responds, “Sir, my people are hungry, there is no work, but the fields are dry and we must have more water.”  So President Obama says, “Tomorrow the problem will be fixed.” The next day the problem was fixed!  On to the next Village!

So President Obama becomes a great friend to the people.  Sound impossible?

Well in a sense this describes AID. The USA is a country that provides an enormous amount of foreign AID to many such countries in Africa.  Yet Africa is resentful; they have a disdain; so many whom we aid have so little regard and maybe in many instances, justifiably so!

But how do we change that? Can it change? Can goodwill be reconciled in countries that do not overtly support western thinking and culture, yet would like to live it?  Is it all about a mere bus tour?

So what does it take; a real walk through the crowds – a crazy despotic colonel who actually had the chutzpah to manifest this imaginary scene?

Perhaps here is one reason why Muammar Gaddafi was so well liked in Africa and why so many Africans are truly disturbed at the way he died.

In an article by award winning journalist Luis Nhachote, he writes:

(note: spelling is as appears in original Article)

In Mozambique, many people will remember the antics of the colonel and the times he spent there. Frequently during his visits, he nonchalantly shuffled the protocols of the Frelimo government to gain favour with the public.

I remember the 2003 summit of the African Union in Maputo in 2003. He crossed the border into Namaacha, the southern-most district of Mozambique.

Unannounced, the flamboyant colonel stepped off a large bus, surrounded by his bodyguards: uniformed beauties with black hair cascading from underneath their berets, armed, gorgeous and very dangerous. The first thing he did was hand $200 to the nearest old man he saw. The elderly gentleman was resting in the sun in front of his small makeshift house.

At the time $1 was worth 25 meticais — the Mozambican currency. With that you could buy four loaves breads, or a litre of milk. It may not sound like a lot, but to the poor of Mozambique, it was a small fortune.

The scene was that of a “benevolent” Gaddafi. He continued with the lavish distribution of hundred dollar bills to every person he passed, an unheard of gesture in this poor community.

At the end of his township tour, he turned to the journalists and personally handed a hundred dollar note to each of us.

In Maputo, on a visit to a neighbourhood built after the floods of 2000, he was told that a lack of running water was a major problem for the residents. He asked the local authorities how much they would need to rectify the situation. Right there and then, he issued some orders to his staff. The next moment, they appeared with a suitcase, packed with dollar bills. He counted out $5 000 and handed the money to community leaders. He turned to the people of the community and said: “I’ve given you the money. You will have water soon.”

After this ceremony of generosity, a lively celebration followed — courtesy of the colonel.

This time, we journalists were not included.”

(Luis is an award-winning Mozambican journalist who is completing his fellowship at amaBhungane, the Mail & Guardian’s Centre for Investigative Journalism)   see Article at http://www.thoughtleader.co.za/amabhungane/2011/10/22/gaddafis-gifts-to-mozambique/

Muammar Gaddafi, who had ruled Libya for 42 years from 1969 to 2011, died on 20 October 2011 during the 2011 Libyan civil war. The exact circumstances of the final moments of his life—following his capture after the Battle of Sirte—are unclear.

Gaddafi survived the strikes and took refuge in a large sewage drainpipe with several bodyguards. A nearby group of NTC fighters opened fire, wounding Gaddafi with gunshots to his leg and back. According to one NTC fighter, one of Gaddafi’s own men also shot him, in order to spare him from being arrested.[12][13] It is unclear if NATO aircraft were involved in helping secure Gaddafi’s capture by Libyan forces on the ground.[11] During a press conference the NTC showed guns Gaddafi allegedly had with him, when he was arrested. He was armed with a gold plated Browning pistol and a Smith & Wesson .357 Magnum loaded with expanding bullets (so called dum-dum) which are illegal in warfare.[14]

“The world is not as clear as it seems until we delve into our minds and offer a collective take on what we see. But first we must see!”

One thought on “Food for Thought! Muammar Gaddafi is Still in the Refrigerator!”