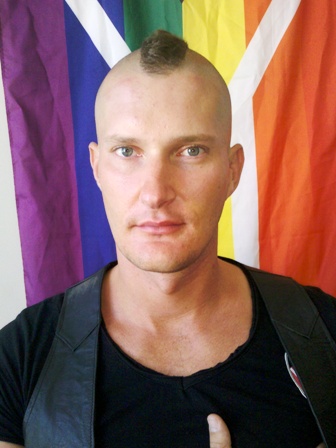 The team behind the Gay Flag of South Africa (Designer Eugene

Press release from Gay Flag S.A.  – Permission to cross post granted to all and use of Photo.

Brockman and his partner Henry Bantjez) are glad to report that Mika Stefano will be joining the team of the Gay Flag of South Africa.

The Gay Flag of SA was launched in Cape Town at the mega-event Mother City Queer Project last year has gained momentum, first by being prominent during most events part of the Cape Town Pride festival, and then toured the country along the Garden Route up to Port Elizabeth.

The Gay Flag of SA is also set to be present during Nelson Mandela Bay Pride 24th September and Jo’burg Pride on the 1st of October as it has been also at the recent London Pride.

Eugene Brockman: “We as the people behind the gay flag of SA want make the flag as accessible and widely represented as possible. As we are Cape Town based and doing most of this work at our own expense we have not yet made strong impression on the gay scene in Johannesburg and Pretoria. However this is all set to change, thanks to Mika Stefano.”

Henry Bantjez added that: “We believe Stefano has the perfect mix to represent the Gay Flag of SA in Gauteng. He will be joining people such as activists Melanie Nathan and Ndumie Funda who have represented the Gay Flag of SA in the fields of advocacy and gay rights, and we should not forget the social side of our community.”

Mika Stefano has been named by the Gay Flag of South Africa as a spokesperson and promoter as their Jo’burg representativie of the pink community.

Mika Stefano is a public profile in SA, present at big social scenes in the most colourful outfits, a TKZee music video as well as being a regular guest on ETV, Vuzu.TV and MTV Base delivering commentary on entertainment stories.

Mika Stefano is also a prolific blogger, with a young voice appealing to black and white, gay and straight, male and female, rich and poor.

When asked about his new title as Gauteng representative for the Gay Flag of SA Mika stated that: “Being GP’s Gossip Gangster, no one know’s Johannesburg like Mika Stefano does.”

I am thrilled to be the representative of the flag in Johanesburg and in South Africa. One of Mika Stefano’s duties will also be to promote pride in being both gay & South African to which he says:

“I am a young 25 year old gay man, South African. We are a country filled with so many colours, not even a rainbow could represent us all. I have been openly gay for most of my life and the reason why, is because our country allows equal rights for all. It is important to celebrate both.”

The Gay Flag of SA is also looking for more representatives to be the voice for their gay community across South Africa.

Read more about the Gay flag of SA their parties, people and successes on @GayFlag4SA and @MikaStefano on twitter as well as on their respective facebook groups.