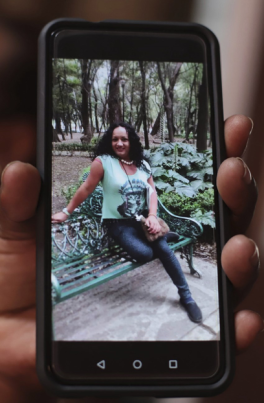 As a country conditions expert who testifies for LGBTQI people from African countries, I often speak about the risk of death for deported lesbian, gay, bisexual, transgender, intersex, queer asylum seekers and allies. I know some American judges do not take this seriously and that often government lawyers fight asylum cases in disbelief. Well ‘the proof of the pudding,’ unfortunately ,’is in the eating!’ Camila Díaz Córdova was deported from the United States despite telling American asylum officers that she feared for her life in her home country. And now Trump has new anti-Asylum rules proposed that will result in violent deaths for LGBTQI asylum seekers as proved in this tragic case.

Diaz left El Salvador in 2018 and traveled to the U.S. with a migrant caravan to request asylum, as NBC News previously reported. After her claim was rejected, she was deported back to El Salvador.

From the Report  NBC:

Three police officers were convicted in a Salvadoran court in the 2019 murder of Camila Díaz Córdova, a transgender woman who had been deported from the United States the year before.

Each officer was sentenced to 20 years in prison.

My Reporting from Yesterday :

UNHCR Calls for Investigation into Murder of Transgender Woman in Guatemala

GUATEMALA CITY, Guatemala – UNHCR, the UN Refugee Agency, expresses its deep dismay at the violent death of a Salvadoran transgender woman who had applied for asylum in Guatemala. The woman’s body was found on August 1 at her home in Guatemala City. She had fled El Salvador in 2017 after having suffered violence due to her gender identity and the persecution of the gangs.

UNHCR calls on the Guatemalan authorities to fully investigate the death in light of its commitment to protect people in the LGBTI community and people seeking international protection in the country.

“We express our condolences to the family and loved ones of this woman who was trying to rebuild her life in Guatemala after being forced to flee her country due to violence,” said Giovanni Bassu, UNHCR Regional Representative for Central America and Cuba.

Violence and persecution continue to force an increasing number of people from Central America to cross borders in search of protection.

In 2019, more than 188,000 new asylum applications were registered by people from Northern Central America (El Salvador, Guatemala and Honduras), fleeing the deterioration of security conditions and violence. In total, some 790,000 people have fled within their countries or across borders seeking protection. The region shows some of the highest rates of domestic violence, femicide, and sexual and gender-based violence.

UNHCR reiterated its commitment to defending the rights of LGBTI people and highlights the importance of making visible and responding to the vulnerable situation in which they live.

Unfortunately it is the United States of America that has tuned its back on LGBTQI asylum seekers, especially in light of the fact that it’s current Trump policy illegally turns people away at the border, having a dramatic impact on trans and LGBTQI people from persecuting countries, to include Africans who have passed through several countries making the long and arduous journey to the U.S. Southern border, to no avail.

The Trump administration is also proposing new rules, vigorously opposed by the global and U.S. legal communities and human rights organizations, thwarting crucial asylum relief sought by the most marginalized of groups in the world.

Lest we forget the FEB 2020 case of Camila Díaz, 29, who had unsuccessfully sought asylum in the United States from El Salvador, and was deported back to her home country by ICE, where she was fatally beaten in January 2019.

An agreement between the United States and Guatemala, the US-Guatemala Asylum Cooperative Agreement (ACA), enables the United States to rapidly expel non-Guatemalan asylum seekers to Guatemala without allowing them to lodge asylum claims in the United States, but also leaves them without access to effective protection in Guatemala. As a result, they are effectively compelled to abandon their asylum claims, and some who have a well-founded fear of persecution appear to be returning to their home countries where they are at real risk of serious harm. READ MORE