The African Human Rights Coalition, based in Marin County, is calling for the resignation of Sheriff Robert Doyle. In light of this week’s California Sanctuary State decision by the Supreme Court of the United States (SCOTUS) to allow the lower Court to prevail on the issue of SB54, and in the face of George Floyd’s brutal murder at the hands of police, it is time for the County of Marin to acknowledge Black Lives Matter to the extent that it removes all racist relics, which includes those serving and leading our communities, who have exerted or harbored racist and xenophobic ideology or policy, disproportionately and unjustly impacting people of color. The Letter to Sheriff Doyle speaks for itself.

In light of this week’s California Sanctuary State decision by the Supreme Court of the United States (SCOTUS) to allow the lower Court to prevail on the issue of SB54, I am asking you to resign as Sheriff of the County of Marin. This is the only course of action that will validate any regret you may have for your stance against sanctuary which caused many people and families in Marin much pain. I am also asking you to stand down for other profound reasons as hereafter expressed.

Your failed leadership on the issue of sanctuary looms ludicrous in the spotlight of this new SCOTUS ruling, now evidencing that you were wrong. You preside over a force that has a long record of racial profiling.  You are asking for funding that should be shifted from police to reinvesting in our communities, placing you at radical odds with current calls for new forms of policing. The only way to make amends for your past misguided  leadership and given this climate our County’s need for progressive innovative leadership would be through your immediate resignation:

Your declaration that California Sanctuary Law is inapplicable was an illegitimate position, now clearly determined as such by the SCOTUS decision not to rule against the lower court. Your defiant actions shirking the law caused serious detriment to our community. Furthermore, in the face of George Floyd’s brutal murder at the hands of police, it is way past time to acknowledge that black lives matter and hence it is crucial that we remove all relics of racism, which thus includes those who have helmed racist and xenophobic policies in their leadership.

In May 2018 the San Francisco Chronicle reported this quote from you:

“A lot of people think SB54 makes us a sanctuary state. It doesn’t, at all.” You then proceeded to defy SB54, hurting many families in our community.

Yesterday, the Supreme Court of the United States rejected the view you shared with Donald Trump though its decision to not rule against the lower court. The Trump administration argued that the California laws were aimed at interfering with immigration enforcement and that the sanctuary law, SB54, violated a federal statute requiring states to allow police to inform federal agents of the immigration status of anyone in local custody. But a federal judge in Sacramento ruled in July 2018 that the federal law did not require states to cooperate with immigration agents by informing them of impending release dates or holding immigrants for transfer to federal custody. You continued to act according to the Trump perspective even after that, reflecting what for many in this county is tantamount to a racist and xenophobic stance.

The only time you seemingly mitigated your anti-sanctuary view was when you were taken to task by Marin residents and social activists who came out during the TRUTH ACT FORUM to oppose you, the latter a sad acknowledgment that you were only willing to shift “under pressure.”

I was at the Board of Supervisors chambers TRUTH ACT FORUM listening to the devastating accounts of how your policy and actions hurt children and families here in Marin. The human cost and trauma for some is ongoing. Lest we forget the sordid history of racial profiling in Marin during your 20 plus years at the helm and there are still ongoing questions as to your relationship with ICE.

Following the Black Lives Matter call for equity and racial justice, and given your history, it would be unjust for you to continue in your position. We want Marin County to be led progressively into a post-racial era and this cannot be accomplished by someone who nurtured racist policy, with the added audacity of defying State law while doing so.

Given the systemic and institutionalized nature of racism and lack of diversity in Marin as a result, undoing the system and impact of racist policies dating far back, is an enormous task. This county must start by admitting its wrongs, owning its mistakes and cleaning them up. To do this we must embrace anti-racism head-on. To accomplish this, with residents, institutions, government and leadership hand in hand, the first step calls for a clean slate, to rid this County of all relics of the past that reflect racism and xenophobia, just as if we are getting rid of an old confederate flag, the statute of a racist general or a street named to memorialize a slave trader: This is non-negotiable as there is no undoing what you did and what you represented. Your past actions stand for Marin akin to a statue of Robert. E. Lee, a confederate flag and a Sir Francis Drake Blvd. It is now time to remove all the relics that scream racism.

We can no longer harbor what you stood for in Marin County and if you remain in your position, it is as if we are condoning your trajectory. Continuing as sheriff serves to validate and nurture the racist and xenophobic path that you took us down to this point.

As we head into our post-racist era, please be part of the solution – and your resignation is the only way forward.

SHERIFF DOYLE RESPONDED and talk about not being woke, immature, impulsive: 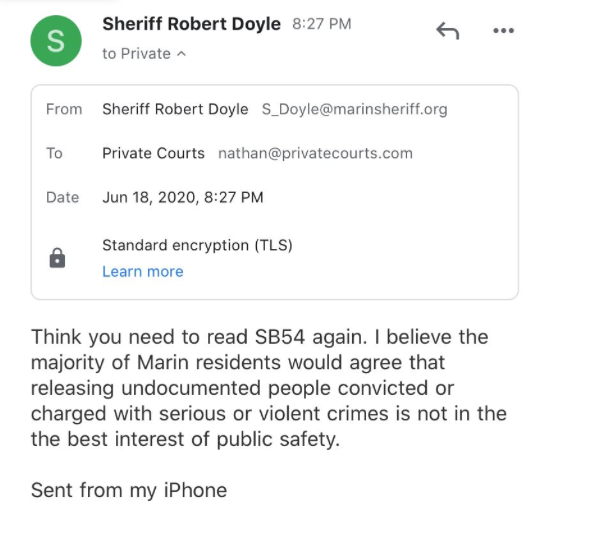 SIGN MY PETITION CALLING ON DOYLE TO RESIGN HERE.

In a rally prior to the Truth Forum meeting, more than 25 Marin organizations, including MVCAN  joined with ICE Out of Marin y Justica Para Todos, a grassroots coalition of immigrant justice advocates, to request that Marin County Sheriff Robert Doyle cease collaborating with ICE. MORE HERE

ICE OUTOF MARIN SITE noted a couple of years back:

ICE Out of Marin, in partnership with multiple grassroots partners and the Marin County Board of Supervisors, organized Marin County’s first TRUTH Act Forum.  By any measure, it was a tremendous success, with hundreds of Marin residents showing up to support Marin County immigrants.

We proved that Marin County Sheriff Robert Doyle is sensitive to outside pressure.  Just days before the TRUTH Act Forum took place, Sheriff Doyle announced a shift in Marin County Sheriff’s Office policy which would limit the circumstances under which he would contact ICE.  This is significant because the Marin County Jail is the main source of deportations in Marin.

Since then, the Sheriff has reported a substantial drop in the number of Marin County inmates picked up by ICE from the Marin County jail.  Upon closer inspection, however, we have many questions about whether or not inmates transferred to ICE were transferred even though they may have had no convictions, only open charges.  This is not in the spirit of SB 54 and is allowing our Sheriff to act as judge, jury, and executioner.  Unchanged is that ICE still picks up inmates from inside the County Jail.  ICE is still proactively notified of upcoming release dates.

If those numbers are what they seem, we should be pleased that our pressure has pushed Sheriff Doyle in the right direction.  Nevertheless, the changes made by the Marin County Sheriff’s Office are not enough.

We must keep the pressure on Sheriff Doyle to STOP ALL COOPERATION WITH ICE!