If you are going to deny equality of treatment even within the process of seeking justice that is in and of itself an injustice that defecates on the very tenets of equality and spews racism.

We Are All Born Free & Equal

We do not Discriminate as these rights belong to everybody

whatever our differences and

no matter who we are

We’re all equal before the law

We all have the absolute right to life

There can be no slavery

We have these rights no matter where we go

And our Human Rights Are Protected by Law

It took 8 minutes to steal each and every one of these basic rights – until all that was left was a lifeless George Floyd, robbed of his rights and deprived of his life….  by one police officer- Derek Chauvin and a complicit 3, all wearing the uniform that purports to serve and protect in the name of rights……

They broke the rules….

In a mere 8 minutes the perceived criminal became the victim to a crime and the perceived protector became the criminal…. and yes albeit innocent until proven guilty …no one is absolved from equality in the process of getting to that point ..

Notwithstanding the video evidence there have yet to be arrests.

If there was video evidence of anyone other than a white cop pushing a knee into the neck of another who screamed “I cannot breathe” and then died- and so overt – to which 300 million American residents bear witness – that man would already be behind bars with charges pending ….

In fact that perpetrator would be perceived as an immediate danger to others .. after all he killed a man, who but for HIS actions might otherwise be alive …

Why does wearing a uniform absolve a suspect to a crime from arrest? He is a clear suspect – why is he free?

Here are the elements for the crime of murder, in its most basic form: The crime of First-Degree Murder under most U.S. state laws require willfulness, deliberation, and premeditation to take a human life. It is not always required that proof of the three elements are present when certain types of killing occur.

Within hours of seeing the video on media, incensed and with clarity, I posted my reaction on my Facebook page, denoting these elements:

Now when someone does that while wearing a cop uniform that denotes added responsibility to discern the meaning of force and its impact on the human body – and so a cop continuing the action – knowingly – that is murder with extenuating circumstances.

If you’re standing by and watching as a member of the arresting group hearing him say “I cannot breathe”, you are complicit in the premeditation too. Charge them ALL 4 with murder! #GeorgeFloydMurder #GeorgeFloyd #JusticeForGeorge

With this said, no wonder there is rioting at ground zero of the George Floyd murder and no wonder it is spreading.

Minneapolis officials have got it wrong. They need to revert to a human rights mode of thinking…. where it is very clear to us all that white cop is being given a uniform and a white skin to clothe an inequality that cannot be allowed – and Mr. Floyd continues to be deprived of his equal treatment even in his death. If you are going to deny equality of treatment even within the process of seeking justice that is in and of itself an injustice that defecates on the ideal of equality that human rights insist upon…..

All this aside inequality by virtue of color is racism and the City official of Minneapolis continue to nurture racism in their dilatory failure to arrest NOW!

Third degree murder is non-intent based! Its a bullshit charge – given the evidence actually viewable and a basic deduction. CHAUVIN should be charged with murder with intent. George Floyd also was non-responsive for 3 minutes – maybe he could have been revived! But the knee continued to press down on his neck! The minute Mr. Floyd said that he could not breathe, the cop formed intent. “I can’t breathe” means I am going to die.  Any human being knows that we need to be able to breathe to live.  Arrest the other 3 now! #JusticeforGeorgeFloyd

HISTORY WILL SHOW: they arrested a CNN reporter before the murderer he was reporting on at a protest begging for the murderers arrest! To correct this wrong and the related history of wrongs – the entire Minneapolis law enforcement hierarchy and police force should be stripped naked and re-created, both literally and figuratively. That means from the chief down they should all be fired and a new breed of human trained and given the job – a department reinstated with new protocols new mindset new behaviors and even new uniforms !

This should happen in every jurisdiction- while starting a truth and reconciliation and re educational campaign to attack racism! All nationwide! 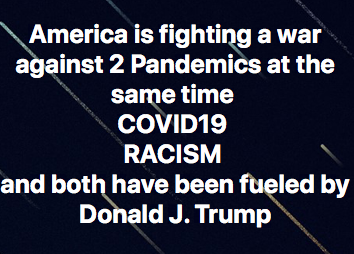