San Francisco, CA (December 20, 2018) – The Center for Gender & Refugee Studies (CGRS) denounces the new Migration Protection Protocols (MPP) announced by the Department of Homeland Security (DHS) this morning. Under this new policy, asylum seekers arriving at the United States’ southern border will be forced to wait in Mexico for the duration of their immigration proceedings. This move is yet another illegal attempt by the Trump Administration to rewrite our nation’s immigration laws in order to advance an inhumane, anti-refugee agenda.

Under the MPP asylum seekers will be forced to spend months or even years in Mexico awaiting their immigration court dates. As documented by numerous human rights groups, Mexico is not a safe country for migrants and refugees. In recent years, gang- and cartel-perpetrated violence and crimes against migrants have increased in Mexico. Asylum seekers confront numerous dangers on the treacherous journey through Mexico to the U.S. border, including extortion, trafficking, sexual assault, and other harms. Women, children, and LGBTQ asylum seekers are particularly vulnerable, and are frequently the victims of sexual violence and exploitation. Just last weekend, two Honduran boys traveling with a group of asylum seekers were murdered outside of their shelter in Tijuana. Forcing asylum seekers to remain in Mexico where these dangers are pervasive is unconscionable.

The new policy also presents serious due process concerns. Asylum seekers navigating our immigration system from within the United States already face numerous legal and procedural obstacles. Those forced to prepare their cases from Mexico will be at an even greater disadvantage. Under the MPP, it is unclear how applicants will access legal services and other resources needed to present a successful claim. Mexico cannot offer adequate legal or social support for these individuals; its shelters are overrun and, needless to say, its attorneys cannot represent asylum seekers in U.S. immigration courts.

The Trump Administration continues to wield dishonest and hateful tropes about immigrants to justify cruel policies like the MPP. In today’s DHS press release, Secretary Nielsen broadly claimed that the new policy would prevent “fraudsters” from exploiting “asylum loopholes” to gain entry to the United States. These assertions are baseless. Men, women, and children fleeing astronomical violence in the Northern Triangle countries of Central America raise bona fide refugee claims under U.S. and international law and have a right to seek asylum. Nielsen’s claim that asylum seekers “often disappear” before their court dates is similarly untrue. Asylum seekers in deportation proceedings appear in court at very high rates, and those with legal representation appear nearly 100 percent of the time.

“The MPP is an ill-conceived, inhumane, and untenable policy,” said CGRS Co-Legal Director Eunice Lee. “The new policy blatantly violates our immigration laws and flies in the face of international protection standards. If implemented, it will endanger the lives of thousands of asylum seekers.” CGRS calls upon our Administration to immediately rescind this unlawful policy.

“This is a paralyzing policy that serves ultimately to deny LGBTQ people asylum before they have exercised their right to seek it. When I look at the African LGBTQ people who have arrived at the Southern Border and have sought asylum, and the extent of the work involved in providing legal assistance, and safety, I am struck by how ill-informed and cruel this new policy is. I cannot imagine how this most marginalized group of people will be able to succeed in their asylum applications under these harsh constraints, all the while trying to stay safe in climate which is often hostile to LGBTQ people. LGBTQ Africans are a small desperate group who have gone through a life endangering journey, with few to no options, to reach the Southern border. LGBTQ asylum seekers are escaping untenable violence in their own countries. Some have undergone year long journeys to make it to that border. We are supposed to hear asylum claims – even if it means detaining the asylum seeker until they receive parole, asylum or deportation, depending on the success of the case. We provide pro bono attorneys and experts to assist in these cases and we have many willing such volunteers who understand the stakes. How will these asylum seekers  get by if stuck in Mexico pending their cases? How will they receive crucial resources? They are not Spanish speaking and the Mexican government, organizations and volunteers are not equipped to provide the assistance that we can on this side of the border.  I am thoroughly disgusted in this Government persistently doing all it can to thwart its international obligations in this arena. We once stood so proudly as a nation with a human rights record that welcome the persecuted.” 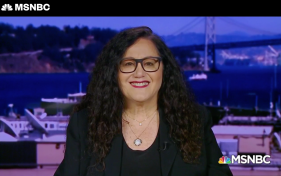