Friends are concerned that Sakhile “Oros” Msibi  has been murdered, possible with ritual as motive and fingers are pointed at Swazi King

It is hard to imagine that in this day and age, especially with social media providing linkage and quick contact, that a very public socialite could go missing .  Some suggest that the fact that the young man is openly gay – could play into this:  Amidst the denials of the Royals, these accusations are coming direct from Swazis themselves.  Apparently the family of the man is concerned that he has been kidnapped and sold into human trafficking. All the while his FB page continues to post updates, with naysayers asserting it has been hacked.

Here are excerpts report from the Swaziland News-

Popular socialite Sakhile “Oros” Msibi who recently made a brief confirmation that he was alive and fine in the United States disappeared with three soldiers while around Lozitha Palace. Preliminary findings of an independent investigation conducted by this Swaziland News publication suggests that on or around 22 April 2018, Sakhile Qhawe Bhekisisa Msibi disappeared with Shadrack “Khekhe” Mamba, Celumusa Norman Dlamini and Zakhele Education Kunene, these are members of the military who work for the royal family. The socialite was fresh from visiting his friends Princess Temaswati and Tebu after being invited to attend the various celebration events as part of the 50 years of independence and King’s Birthday.

Our investigation further obtained fresh evidence substantiating how the socialite’s passports, cells phones and other personal documents were confiscated used to disseminate false information implying that he was safe, free and fine in the United States. In a recent telephone conversation between the socialite and a close family member, the socialite confirmed that his cell phones were taken from him.

“I just got my phone back now, everything was just a mess but I’m fine” he said.

But his family seemed not convinced that their son was free, they suspect he was trafficked and held hostage for unknown reasons.

But this matter of alleged human trafficking, remains one of the most complicated as the Swazi Police are seemingly prepared to conceal evidence or disseminate false information to the family on where exactly the socialite is currently kept. Swazi Police Spokesperson Phindile Vilakati promised to respond to our questions through Government Spokesperson Percy Simelane.  “ Nkhosi please contact Prime Minister’s office for any concerns within eSwatini. We will forward our responses through them as well” she said

The latest suspicious travel records of the disappeared popular socialite implied that he was travelling with car registration number YSD 019 BH, a Toyota Sadan owned by Mfanaleni Mavuso. A background check conducted soon thereafter revealed that this is the same car used by the socialite to cross to South Africa on the 12 April 2018, however, on that particular day it was driven by Jeffery Mpendu Hlatswako. It has been disclosed that few days later, the socialite allegedly emerged on social media confirming that he was alive and soon thereafter he had a telephone conversation with one of his family members …….

The Swazi report is confusing – and the alleged telephone conversation not clearly reported. It goes on:

Gciniwe Fakudze, the former Matsapha Town Board Chief Executive Officer (CEO) who was close to the missing socialite did not respond when asked to share her comments on the matter. But Goodwill Mathonsi, the Coordinator of the United Kingdom based Swaziland Human Rights Network said the disappearance of the socialite was a serious matter that requires attention. Speaking to this publication Mathonsi said it was surprising that the police was not prioritizing the matter yet it remains their duty to protect citizens.

“The mysterious disappearance of Sakhile Qhawe Msibi is a cause for concern from a security point of view and the inaction by the police to urgently investigate this disappearance seems bizarre to say the least. The disappearance of people in our country is a growing scourge that requires a proportionate response from the police,” he said

Mathonsi said regardless of status in society, it was the duty of the police to investigate any disappearance of a citizen without fail. “Justice not only needs to be served but also be seen to be served and failure to do so is nothing short of dereliction of duties on the part of the eSwatini police” he added.

And so while the Swazi government seems to dispel the idea that Msibi is missing, the internet is ablaze with speculation and concern, with this example:

I told you my fellow SWAZIS in my posts that this evil arrogant power drunk non stop evil abusive criminal KING MSWATI 111 will one day screw up and make the wrong move and get caught in these UNITED STATES and fuck with the wrong people these Americans and not be able to untangle himself like he always does and gets away with murder ABOVE THE LAW in his personal farmland of SWAZILAND!🙏🏾🙏🏾🙏🏾🇺🇸🇺🇸🇺🇸😎😎😎

Goodwill Z Mathonsi unbelievable brother! And this Swaziland Ambassador tothe United States Njabuliso Dlamini Gwebu spoke to him and positively identified him and confirmed him as found to his family his and the search was called off in Swaziland! “He is alive and well in New York Mandla I know him personally and I was so glad to hear his voice finally we are so relieved” wwwwww!

I now can get my Congressman Gerry Connolly involved and get the ball rolling because the King Mswati 111 killed this GAY SWAZI boy and now using the SWAZI TOP DIPLOMAT in AMERICA to cover up his ritual murder!

Using my sister who works for him WELILE DLAMINI MASUKU the daughter of my uncle MEDICAL DOCTOR MIKE DLAMINI and the mother Former PRESIDENT of RED CROSS! I GOT your bullshit KING MSWATI 111 MAKHOSETIVE from MASUNDVWINI you fell into my JURISDICTION in these UNITED STATES son!

This time you got caught in your bullshit RITUAL MURDER!

Ok son it’s going down and you ain’t above the law internationally like you are in your abusive farmland you just woke up one day and renamed so arrogantly evil! Where you kidnap, rape and steal and shoot and kill innocents and evict and bulldoze Swazis!

Good god the almighty Sakhile Oros Msibi will not die in vain and he is also a GAY BOY! Wowwww! What a teaching moment indeed! I need to take a whole vacation for this one! Once I am caught up on the gig after thanksgiving it’s on and popping “KING of The WORLD” inkhosiyemhlaba! You will not untangle yourself out of this one I guarantee you 100% evil man! I will get the Human Rights Campaign involved in this one son and US STATE DEPT and the FBI May have to look at the other 46 Swazis cases of ritual murder this year alone that you failed to account for totally you and your HENCHMEN ROYAL SWAZI POLICE! And the other cases of RITUAL MURDER of the man in your KING MSWATI PRISONS you used as a scapegoat BAYETHE.

If he is in the United States, as alleged by the Swazis, then surely U.S. authorities will have evidence of his entry into the United States.  Perhaps concerned family and friends should contact the State department – and if he did not enter, then certainly we would know that ONLY the mystery is alive and well.

With all this said and many other accusations of multitudes of abuses blaring online, the only convincing way out of this mystery would be for the young man to post a video of himself reading a current newspaper and speaking to current events – from his mouth. It is ONLY if he does that – that we can believe – amidst this swirling controversy- that he is in fact alive and well.

In the meantime I will be keeping an eye on this case and doing my own investigation to possibly pursue advocacy from the African Human Rights Coalition.

And his FB Post from September asserts he is in the USA – but friends are suspicious of the post:

Some friend comments quoted on the above post, and I do not mention names:

“Is it really you who wrote this status? Doesn’t sound like it”

” I could be wrong but Oros doesn’t write like this, I’ll be convinced if atleast he has called his family”

” Baby!!!!! Please whatsapp me! I have been crazy worried!! Love you loads hunnie x”

“We need a live Facebook video please…so we see.”

“Does nt sound like ngu Oros lona. if itwas the bubbly Oros he was going to post a pic with #teamthis”

“This check in even looks dodgy 😡😡 vele sicela I video on second thoughts, please…”

“Give us a signal Oros”

“This is not Oros , give us back our friend.. He was going to post a video, cs of the person he is ,knowing a lot of people were worried.”

“I doubt this is Oros yati, the language is so not him”

“I hope this is Oros because he normally writes, ‘ Team This’ at the end, we tired of these hackers”

Many noted that Oros’ signature and usual “TEAMTHIS” was not written at the end of this post,.

My e-mail commissionermnathan@gmail.com
Support our work at African Human Rights Coalition
Check out my shenanigans on Facebook
Follow me on Twitter – @MelanieNathan1
Check out my Instagram: Commissionermelnathan
@AfricanHRC
MORE INFORMATION ABOUT King Mswati 3:
King Mswati III of Swaziland announced that he was renaming the country “the Kingdom of eSwatini” 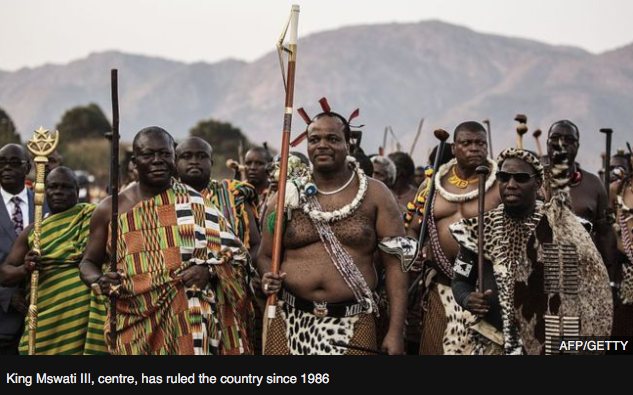