When Corporations think it is in their interests to promote homophobia on the Continent of Africa, one wonders if they realize they are actually promoting hate and harm. It is bad enough that Africa’s LGBTQI community suffers persecution by being criminalized through archaic unconstitutional penal codes inherited from the Colonizers, as well as newer anti-homosexuality legislation, courtesy the American right wing Evangelicals and complicit politicians seeking to further their popularity by scapegoating gays. Now for a global Corporation to try and financially capitalize off this persecution and this scapegoating defies all decency.  A for profit company could not sink any lower:  Meet INFINIX, the popular mobile phone company with a Facebook page of over 7 million followers.

Infinix, a Chinese company and massive player in the mobile phone market, is not only participating in the anti homosexuality milieu of Nigeria, but through its numerous billboards on Nigerian school campuses,  is actively encouraging direct violence to be perpetrated on Nigerian students who happen to be LGBTQI.

The Billboard says: “Say No to lesbianism, Homosexuality and Drug Use”

This picture was taken on a Nigerian campus. After seeing this photo on a Facebook feed, I researched the Internet and found I was not the first to be horrified. Our dear friends Nigeria at No Strings assert via their BLOG:

The messages suggest that homosexuality is bad and therefore something to be feared of which this is absolutely not true, as several concrete research studies have proven that homosexuality is normal, natural and a valid sexual orientation just like heterosexuality, but sadly, many still think differently due to ignorance.

In Nigeria, homosexuals constantly experience discrimination and violence based on their real or perceived sexual orientation and LGBT students have also reported cases of abuse while in school.

A research study carried out by a Nigerian researcher Kehinde Okanlawon, revealed that gay students in Nigerian universities experience discrimination and is sometimes even victimized by school authorities.

The Nigerian LGBT community, a community whose suffering is hinged on homophobia is outraged that an International cooperate brand such as Infinix will sponsor messages which are capable of further inciting violence toward Lesbian, Gay, Bisexual and Transgender [LGBT] persons in Nigeria who make up part of its customers.

For Infinix, this might just be an opportunity to advertise and promote their brand so as to maximize sales, but members of the LGBT community are like everyone else who just wants to live their lives in peace, and so therefore do not deserve anything less.

As a global expert witness, giving testimony to Courts in the U.S.A. and elsewhere for asylum cases, asserting the insidious country conditions for LGBTQI people in Nigeria, these billboard add another bullet to the head of gays and lesbians and all LGBTQI in Nigeria. In the United Sates we have had to deal with cases from Nigeria where students who have been ostracized, expelled, brutalized, and blackmailed for being gay and lesbian, seek asylum abroad.

The stories of persecution of gay people, because of the lie and myth spread about them, are horrific. The violence being perpetrated against gays and lesbians in Nigeria is unfathomable. For a Corporation to explicitly support and encourage this is just beyond my comprehension. Surely they cannot be that stupid. They know the extent of the anti-gay sentiment in Nigeria. Instead of being part of the solution, they are participating in the problem – all for profit! I am disgusted.   This Billboard is evidence of that very persecution.

It cannot go unnoticed that this incitement to persecution is at the hands of a global corporation which happens to use operating systems and technology by global and U.S. employer corporations in the such as Google, which emphasizes LGBTQ inclusivity in their diversity employment protocols. You can have no doubt that the very phones Infinix is placing in the hands of these students have been worked on by gay people abroad. I can only imagine how a gay person working with, for example Android would feel knowing they are inadvertently participating in this persecution.

We at African Human Rights Coalition are calling on  INFINIX to immediately remove these Billboards and to issue an apology to LGBTQI people worldwide.

Until that time we are asking for a Boycott of their products and supply chain.

We are asking all corporations involved in the technology being used by INFINIX and all those provide licensing, such as Google  (Android) to investigate this further and to suspend and cease all licensing, supply and business with INFINIX until this matter is remedied.

We are asking INFINIX to provide financial remuneration into a fund which we will establish to continue to provide pro bono legal service, asylum reports, and safe shelter to the casualties of such persecution, whether directly linked to these Billboards air not.

African HRC is currently researching all INFINIX providers and asking anyone for information or research capabilities to assist in this endeavor. If you or any organization would like to sign on to a letter that is being drafted to ALL providers, including operating systems licensors which we believe is Android/Google (still to be confirmed) – please let me know at nathan@AfricanHRC.org. 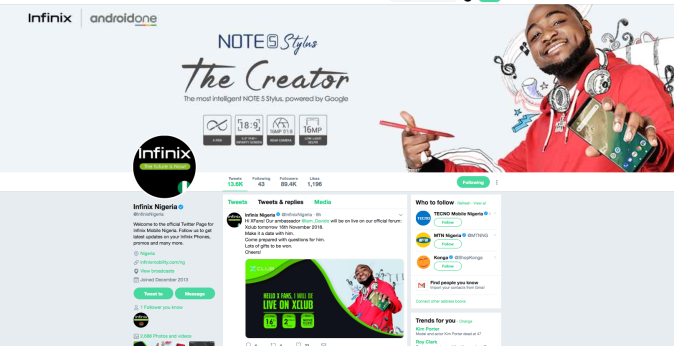