It has been 20 years since The Rome Statute: On 27th September, thirty-five countries renewed their support for the International Criminal Court at the United Nations  General Assembly.  Notably the United States of America has never ratified the treaty.

The Court participates in the global fight to end impunity, and through international criminal justice, the Court aims to hold those responsible accountable for their crimes and to help prevent these crimes from happening again. This is a court of last resort, seeking to complement, not replace, national Courts. Governed by the international treaty, the Rome Statute, the ICC is the world’s first permanent international criminal court.

“The ICC is a central achievement of multilateral diplomacy and a true milestone in the development of international law.”

Read the statement of support for the @IntlCrimCourt endorsed by 35 countries, including Ireland and The Netherlands.(Dutch Ministry of Foreign Affairs) 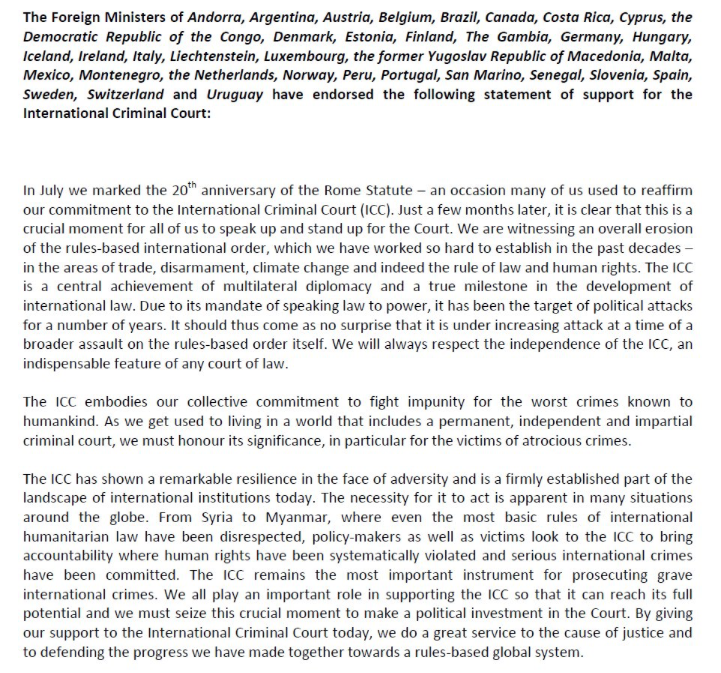 In considering the question of ICC jurisdiction- I wonder if the acts committed by Donald Trump, Jeff Sessions and administration against climate change, and the crime against humanity, where small children are caged and separated from their parents, some never to see them again, in an act of admitted intent by Trump to deter legitimate Asylum seekers, would fall under the ICC jurisdiction.

The Court may exercise jurisdiction in a situation where genocide, crimes against humanity or war crimes were committed on or after 1 July 2002 and:

As of 17 July 2018, a situation in which an act of aggression would appear to have occurred could be referred to the Court by the Security Council, acting under Chapter VII of the United Nations Charter, irrespective as to whether it involves States Parties or non-States Parties.

In the absence of a UNSC referral of an act of aggression, the Prosecutor may initiate an investigation on her own initiative or upon request from a State Party. The Prosecutor shall first ascertain whether the Security Council has made a determination of an act of aggression committed by the State concerned. Where no such determination has been made within six months after the date of notification to the UNSC by the Prosecutor of the situation, the Prosecutor may nonetheless proceed with the investigation, provided that the Pre-Trial Division has authorized the commencement of the investigation. Also, under these circumstances, the Court shall not exercise its jurisdiction regarding a crime of aggression when committed by a national or on the territory of a State Party that has not ratified or accepted these amendments.

The Assembly of States Parties (“the Assembly”) is the Court’s management oversight and legislative body and is composed of representatives of the States which have ratified or acceded to the Rome Statute.

Current situations under investigation by the ICC:

One thought on “As ICC celebrates 20 years since Treaty, Trump Inhumanity is Food for Thought”