More than 100 people witnessed the torturing of 2 women who were subjected to Sharia Law’s punitive measure for admitting to attempting to have sex.

Two Muslim Malaysian women, aged 22 and 32, were each caned six times in the Sharia High Court in the state of Terengganu, after being convicted of attempting to have lesbian sex in a car.

In Malaysia ( and 76 countries around the world) homosexual activity is illegal under secular law and in many countries under Sharia law as well.

According to an official, this is the state’s first conviction for same-sex relations and its first public caning.

Executive Director Gwen Lee said: ‘Canning is a form of torture, inflicting this brutal punishment on two individuals who engaged in a consensual relationship sends Malaysia back to the dark ages.

Monday’s punishment shows the religious right “flexing their muscles and making clear that the laws against LGBT activity will be enforced in their state,” said Linda Lakhdhir, a legal adviser in the Asia Division of Human Rights Watch. Homosexual sex is illegal throughout Malaysia under colonial era criminal law.

The punishment follows a raid last month on one of Kuala Lumpur’s only gay clubs, which saw around 20 men charged for “illicit behavior,” and a brutal attack on a trans woman in a city close to the capital.

“It’s very uncomfortable, (people are) feeling very oppressed right now. People are afraid because this is the first time that two women are being caned for sexual acts,” said Numan Afifi of LGBT activist group the Pelangi Campaign.

The punishment had not previously been used in the state of Terengganu for female homosexuality.

“We don’t know what’s going to happen in the future. That’s the general feeling,” said Numan.

A member of the Terengganu state executive council, Satiful Bahri Mamat, defended the punishment, telling the agency it had not been intended to “torture or injure” and had been carried out in public to “serve as a lesson to society”.

Malaysia is known to be a moderate Muslim-majority country but has seen rising religious sentiment in recent years.

Earlier last month, a minister ordered that portraits of LGBT activists be removed from a public exhibition.

Malaysia operates a dual-track legal system. Muslims are bound by Sharia – or Islamic – law on personal matters like marriage and custody rights, while members of other faiths follow civil law.

At African Human Rights Coalition, we condemn in the strongest terms the conviction and punishment of 2 women, sentenced to pay $800 and canning, by the Sharia Court in Malaysia, as well as the fostering of this human rights infraction  by the Malaysian government.

The canning of LGBTQI people and those perceived as such is torture. Criminalizing sexuality is inhumane and lacks accuracy about the nature of human sexuality, fostering myth and lies.

Human sexuality is natural and any form of criminalization, whether secular or religious is a violation of human rights.

Women are not the property of religions, systems, nor men. Consenting adults should be free to make choices pertaining to their bodies. 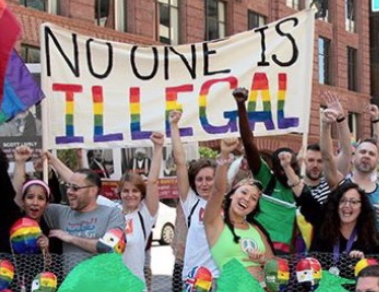