I am PISSED OFF with The View: I rarely BLOG about my Social media commentary – I am angry enough to hope that this gets its spot on Google Search Engines. Here is my Facebook post:

I don’t understand how the producers of the View allowed this to happen: I am in #NYC and went with my daughter and Karen to a taping of The View on Friday, this long weekend – – (yes I know it was a bit of a stretch but we thought would be fun!)

Anyway- Whoopi Goldberg, Joy Behar, et al and yes Meghan McCain, one of the newer hosts, had an on air conversation about the horrific gun massacre of 17 innocent people, mostly teens at Marjory Stoneman Douglas High School in #Parkland, Florida. Also, during a break a young woman mentioned she knew people who had been murdered and how she was personally impacted. It was very moving.

In the discussion Meghan McCain, noted her NRA membership and tried to argue her way through a deflection, saying Democrats in 2008 were in control of the Congress and also did nothing. In their response the other hosts were resolute, though rather feeble. From the applause it was clear the seemingly mostly Democratic audience was on the side of major gun control.

Immediately after the discussion during the ad break, when the show was not being taped, Meghan McCain turned to the audience with a request. At that point, the audience was all riled up by the show-warmer-comedian-guy who gets people to cheer and clap and scream in between segments. Meghan’s request to the riled-up audience is that they all agree to a shout out to her terminally ill dad, Republican Senator John McCain, as she is planning a visit and would like to take home the video of the audience support and show of love for him.

She asked the audience to all scream in unison – ” BIG SHOUT OUT to DAD “HELLOOOOOOO JOHN” – to cheer him up and make him feel good.

I WAS PISSED RIGID! The hypocrisy of all who had anything to do with THE VEIW to allow Meghan McCain that platform moments after THAT gun control discussion.

Imagine seconds after that sad and somber reflection on the murders of these 17 children – to cheer a fucking #Republican political #NRA whore – who took more money from the NRA than any other politician – I believe over 7 Million Dollars (American Hero or not! – THIS is separate issue!! There is a time and place !! And it was not THEN nor NOW!!).

So Meghan turns around with her back to the audience and shoots a selfie video with the mostly Democratic VIEW audience screaming in support of John McCain – because – yes they have been coerced to do it.

I doubt she got me in the shot because I was sitting on the side – but all three of us, my 21 year old NYU student daughter, Karen and I stood there with our mouths shut, our arms purposely folded while most the audience, unaware of those NRA contributions, obliged!!!!

Had Meghan’s camera come my way I would have turned my back.

However I am still offended- deeply – deeply- as an American to have been forced into a situation where I could be perceived as supporting Joh  McCain at ll, least of all on that day!

PLEASE PEOPLE DO NOT VOTE FOR ANYONE WHO HAS TAKEN ONE CENT FROM THE NRA – whether Republican or Democrat. To do so defecates on the memory of those beautiful souls.

By the way – TODAY – I do not care that McCain needs cheering!  I don’t care that he is an “American Hero” – not today I don’t – while I may care on another day – NOT TODAY!

There IS a time and place for everything and the time to honor John McCain in any way shape or form- is not now. Not at the expense of grieving families or beautiful souls.   Today he is an NRA whore like all the others who took their $$$$$ so THAT gun could get in the hands of that murderer! 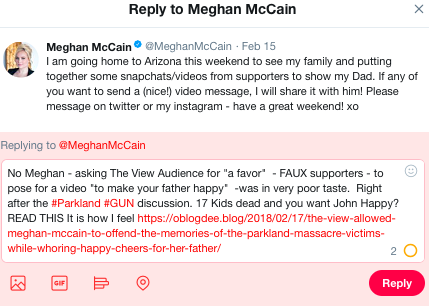