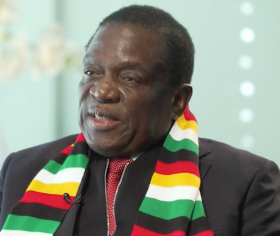 Snipers took up positions around the Zimbabwe stadium amid tight security as jubilant Mnangagwa supporters streamed in to hail the new President of Zimbabwe, Emmerson Mnangagwa, as he was sworn in on Friday and LGBT community expect a replay of Mugabe’s virulent anti-homosexuality stance.

The man known as “The Crocodile” wore a dark suit, red tie and matching handkerchief, and a row of medals on his chest for the ceremony. The former president, who ruled the country for 37 despotic years, was ousted from office when the military intervened after he had sacked Mnangagwa as vice-president. Notwithstanding the power play, be assured they are largely of like mind.

Same-sex marriage is banned in Zimbabwe, and that doesn’t appear to be changing any time soon under Mnangagwa’s leadership.  ALSO Legislation criminalizes same-sex relations.

Mnangagwa led Zim’s delegation to the United Nations last year, where he rejected calls to respect the human rights of LGBTI people, noting:

“With regards to areas that we felt we would not accept, it is issues of gays and homosexuality, which is unlawful in our country. We rejected all those. There are a few countries from Europe which recommend that we reconsider our position with regard to adults of same sex marrying each other…”

And then in a new Interview with CNN’s Richard Quest:

In this one can interpret that the new President is inviting campaigning for LGBT
rights, noting he will follow the law as it stands –  and here I note that his interpretation of the Constitution can be challenged. That said while we do not know for sure where this will lead, activists have an uphill battle as this President will continue to abide by that which keeps him politically popular.

Furthermore, Mnangagwa also previously had asserted that Zimbabweans will

“reject attempts to prescribe ‘new rights’ that are contrary to our norms, values, traditions and beliefs”.

His rejection of basic human rights and insistence on continuing to endorse the homophobic laws will in effect prop up continued persecution of LGBT people, and he is unlikely to make any changes that could hurt the support he is receiving.

In a country such as Zimbabwe the American Evangelical influence through anti homosexuality preaching has served to enhance harmful myth and resulted in intolerance which has led to persecution of LGBTI individuals and communities. This has helped popularize politicians who take the same stand for the sake of attracting votes. Specifically Pat Robertson has had a major influence in that country.

While some activists held onto a small measure of hope in Zimbabwe for change, it is apparent that such is fading, given the anti-homosexuality milieu as being one which serves to boost the popularity of politicians such as the new President.

Several LGBT people are currently seeking asylum in the United States from Zimbabwe. Nothing this President has said or done will help change the extreme danger such asylum seekers face if they are returned to Zimbabwe, and in fact his stance may serve to exacerbate their looming harm.