North Carolina Governor Pat McCrory continues to misrepresent the animus behind the state’s discriminatory anti-transgender law, HB 2, with an appearance on ‘Meet the Press’ this morning. In the interview, McCrory attempted to create cover for himself from the increasing economic fallout directly tied to HB 2 by falsely claiming that other states have similar laws, citing varying inaccurate numbers throughout his interview. The governor also grasped to portray the business opposition to the law as at odds with the values of most North Carolinians – even though 64 percent of residents in the state actually support comprehensive nondiscrimination protections for lesbian, gay, bisexual and transgender (LGBT) people.

The governor at one point referred to the backlash over HB 2 as “a very complex subject and a very personal subject.”

“There’s nothing complex about discrimination – either you take a stand against it or you enable it,” said Matt McTighe, Freedom for All Americans executive director. “Governor McCrory is continuing to defend a law that not only perpetuates discrimination against transgender people, but actually puts them in harm’s way by banning them from using public restrooms. It’s outrageous to imply that there is any scenario under which a law like this makes any sense whatsoever. Governor McCrory may deny it for as long as he likes, but all HB 2 does is send a message to the rest of the nation that North Carolina is not a place where transgender people are treated fairly and equally under the law.”

The governor also said during his interview: “This is basically a restroom privacy issue versus equality, and these things need to be discussed.” The governor’s comment is particularly odd given that the legislature convened a special session and McCrory signed HB 2 into law all in under 10 hours.

“Governor McCrory did not have the time or interest in talking with businesses or transgender people and their families about this bill before quickly signing it into law,” added McTighe. “We know from places like South Dakota, where a Republican governor vetoed a similarly dangerous bill earlier this year, that these personal conversations matter. Governor McCrory and the state’s top lawmakers have no one but themselves to blame for the backlash the state is now experiencing.”

A new report from the Center for American Progress last week found that HB 2 could cost North Carolina more than $568 million in private sector investments over the next two years. The sobering economic outlook came the same week that Deutsche Bank became the latest company to announce it was squelching plans to expand in the state because of the discriminatory law. Deutsche Bank will no longer move forward with plans to bring at least 250 new jobs to Cary. That means the business impact of HB 2 so far includes at least nearly 700 lost jobs, millions in squandered economic investments from businesses including PayPal and Deutsche Bank, and lost revenue from a number of concerts that have been canceled.

Freedom for All Americans is the bipartisan campaign to secure full nondiscrimination protections for LGBT people nationwide. Their work brings together Republicans and Democrats, businesses large and small, people of faith, and allies from all walks of life to make the case for comprehensive nondiscrimination protections that ensure everyone is treated fairly and equally. 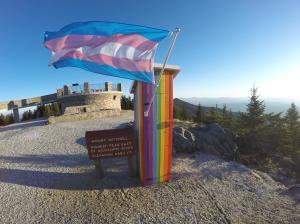 SEE TODAY’S BREAKING  STORY ABOUT THE OUTHOUSE DELIVERED TO THE TALLEST MOUNTAIN IN NORTH CAROLINA
With a letter to Governor McCrory: HERE.