The BDS movement is clearly now a tool for anti-Semitism 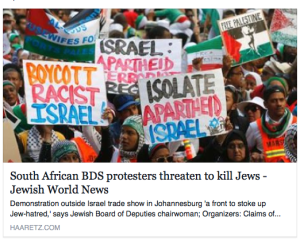 “You think this is Israel, we are going to kill you!” and “You Jews do not belong here in South Africa!” supporters of the BDS movement shouted in front of the Sandton Convention Centre, where the South Africa-Israel Expo and a federation conference was being held. They were joined by protesters in African National Congress and South African Communist Party T-shirts. Together, they disrupted traffic in the city’s business and financial center, reports HAARETZ.

Apparently the ANC officials and figures from the boycott, divestment and sanctions movement who took turns addressing the crowd from atop a small truck have forgotten that many of South Africa’s Jews helped fight against Apartheid in South Africa.

A man who said he had come from Pretoria to attend the trade expo told Haaretz: “The protesters were pushing security staff stationed outside the conference center. It was shocking.”

Security officers blocking the main entrance directed people leaving the event to exit through the attached shopping mall, out of concern for their safety.

It is “every South African citizen’s constitutional right to attend events of our choosing without fear of intimidation,” the South African Jewish Board of Deputies said in a statement.

Last week, an address by prominent Palestinian human rights activist Bassem Eid at the University of Johannesburg, organized by the South African Union of Jewish Students, was forced to end early due to BDS protesters, according to the board of deputies.

Eid, a vocal critic of BDS and Israeli Apartheid Week, is the founder and executive director of the Palestinian Human Rights Monitoring Group. He was escorted to safety by campus security officers after students climbed onto the stage; one stuck his fingers into Eid’s nose.

In a video clip, posted to the Stop the BDS Facebook page, a Muslim student who attended the event registered her shock and disgust with the behavior and messages of the BDS protesters in the audience. “These people are not Muslims, they are barbarians,” cried the young woman,

The BDS movement seems to have indeed triggered this anti-semitism, evidenced by this horrific protest calling for the death of South African Jews.  Instead of denying that which many have witnessed, including video accounts, BDS and ANC participants should issue an immediate apology and a call for specific retraction of all threats of violence related to their movement.

Hate speech is criminal and punishable in South Africa. It is my hope that the South African Government will call for an investigation, especially to investigate members of the ANC – the ruling Government party – who participated in this threatening and hateful protest. I would also want to know if there were any Government representatives participating in the protest.