Part of Bush’s carefully crafted statement meant to placate all included the endorsement of “religious liberty” as the new acceptable evolution from plain old outspoken bigotry. With that undoubtedly carefully placed article, Fred has given Jeb Bush the HRC seal of approval.

“We live in a democracy, and regardless of our disagreements, we have to respect the rule of law. I hope that we can also show respect for the good people on all sides of the gay and lesbian marriage issue — including couples making lifetime commitments to each other who are seeking greater legal protections and those of us who believe marriage is a sacrament and want to safeguard religious liberty.”

…and this Fred Sainz, HRC’s VP – who is referred to in the article as “a leader of the gay rights movement” – believes is somehow acceptable, that bigots are good people.

The article goes on: “Sainz said that for years Republican politicians have talked about same-sex marriage with a negative tone, but ‘Bush put that paradigm on its head.” We wonder if all those years Fred worked for both Bush Sr. and then Jr. haven’t gone to his head! And we can’t help but wonder who wrote Jeb’s quote… perhaps it was Fred, himself.

Again. RELIGIOUS LIBERTY? The very reason for Arizona’s SB1062. The bill that would have given any individual the ability to discriminate against LGBT people had it not been vetoed in the 11th hour by then Governor Jan Brewer after national outcry and the threat of losing the Super Bowl? The Bill which inspired states like Kansas and Michigan to follow suit with bigotry dripping religious liberty acts of their own? Already this year a similar bill has been introduced in Virginia which would dictate:

“a person shall not be required to perform, assist, consent to, or participate in any action or refrain from performing, assisting, consenting to, or participating in any action as a condition of obtaining or renewing a government-issued license, registration, or certificate where such condition would violate the religious or moral convictions of such person with respect to same-sex marriage or homosexual behavior.”

And gays aren’t the only target of religious bigotry. The war on women’s health care last year made headlines, but other protections such as child welfare and domestic violence have also had opt-out bills introduced and/or threatened in Kansas, North and South Carolina, and Texas.

Is this how HRC will word the long awaited comprehensive LGBT legislation planned for congressional introduction this Spring? Will it contain exemptions for EVERYONE whose “deeply held religious convictions” render them incapable to wait on queers in restaurants, or rent them rooms in hotels, or treat them in emergency rooms? Or like Jeb’s convictions that keep him from believing the LGBT community has a civil right to a civil marriage?

Or will HRC expand their Congressional Scorecard into a full-blown Politician Equality Index (PEI) with Religious Liberty ratings to provide cover for their political friends as their Corporate Equality Index (CEI) does for their despicable corporate friends like Monsanto and Goldman Sachs?

We all know that HRC has the primary ear of congressional staff developing the comprehensive LGBT nondiscrimination act. Today’s coal delivery was a reminder to Fred and other HRC staff members involved with crafting this bill that we will not accept religious liberty bigotry because it has no place anywhere near our constitutionally guaranteed civil rights. 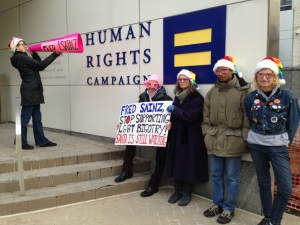