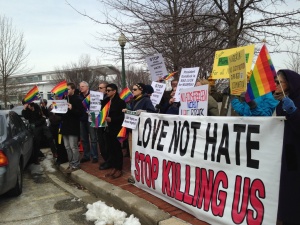 A local Human Rights Defender in Uganda has posted the following critical warning, as news filters in of possibly 3 men, perceived as gay, have been attacked and seriously injured in Uganda. We will keep you updated as more news comes in.

WARNING TO ALL THE UGANDAN LGBT COMMUNITY!!!

There has been identified torturing building In Bwenyogere ,that is Jinja Road, on LGBT in UGANDA,

Its my humble request to all lgbt community in Uganda not to go to Bweyogerere in case some one calls you.

They call you pretending they are member of the community /A member calling you for assistance to rescue him,when you reach there,they :
-beat u up severely
-undress you
-Take all your belongs
and very many other physical torture..

I kindly ask you to start being cautious of the phone calls you receive, don’t allow to go anywhere if someone calls you for help especially Bweyogerere please for the good of your own safety…….

Since President Museveni has signed the Anti-Homosexuality Act, (AHA) followed by the Rep Pepper and Hello Tabloids outing gay people with their photos, many LGBT people have gone into hiding and are being lured by those pretending to be friends.  It would seem that Ugandan straight people think this legislation is a license to persecute those perceived to be gay or lesbian, or those recognized as transgender.

The situation is extremely dangerous.  I am personally helping to support 37 LGBT people now in hiding and ca personally attest to the current terror. Ugandans need to be accountable for this. And the world of LGBT people needs to wake up to what is happening.  Silence by us is not supporting. So called quiet diplomacy did not help Apartheid and nor did it help in Nazi Germany. President Museveni is responsible.

In the meantime LGBT refugees and asylum seekers as well as those seeking to leave Uganda, need urgent help.

The situation is critical. Very few people can be trusted. The warning is clear.

We are calling on President Museveni to bring these MOBS to Justice and to make a public statement asking people not to take the law into their own hands. Unless Museveni comes down hard on this form of injustice, the world will hold him personally accountable for the persecution to a minority in his country.