A total of 28,519 complaints were investigated in 2012 by private non-profit fair housing organizations, U.S. Department of Housing and Urban Development, the U.S. Department of Justice, and state and local government agencies such as state civil rights commissions.  HUD estimates that this already high number represents less than one percent of the approximately four million acts of housing discrimination each year against current populations protected by federal law.

KEY FINDINGS IN THE REPORT:

Spike in complaints by people not protected under federal fair housing law:
-source of income up 38%
-sexual orientation up 43%
-marital status up 63%
-gender identity and expression complaints reported for the first time.

“It’s high time to amend the Fair Housing Act to include protections for sexual orientation and gender identity as well as source of income,” said Shanna L. Smith, NFHA’s President and CEO.  “The Fair Housing Act has been amended over the years to adapt to changing times.  It’s time for the federal government to catch up with the states doing the right thing and to protect all people from housing discrimination.”

Landlords and other housing providers in 38 states can still discriminate against a family simply because of their source of income, even if they can afford the home.  Legal source of income can come from alimony, child support, government assistance from Veterans Affairs and HUD, and many other sources.  This discrimination hits low-income people the hardest; the worst hit are low-income women and families, people of color, and people with disabilities.

“If a family qualifies for an apartment and can pay for it, they should get it,” continued Smith. “It’s simple economics.  Today marks the 45th anniversary of the Fair Housing Act passed on April 11, 1968, one week to the day after the Rev. Dr. Martin Luther King, Jr. was assassinated.  Dr. King knew that poverty was the next frontier to fight when he began his Poor People’s Campaign at the end of his life.  Congress should honor the memory of Dr. King and modernize the Fair Housing Act for the 21st century.”

Note:  All the more reason for a Full Equality Bill for LGBT People akin to The Civil Rights Act:- Nothing short of that, be it marriage equality or employment equality will spell true and full equality until the law of the U.S.A. fully outlaws discrimination against LGBT people on a State and Federal level. 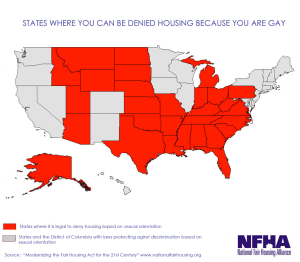 2 thoughts on “Housing Discrimination against Gays, Lesbians, and Poor Still Legal in Most States”