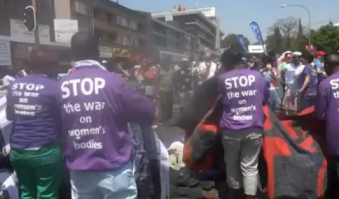 The board of Johannesburg Gay Pride Festival Company (JGPFC) has voted to wind up the Section 21 (not-for-profit­) company that has produced ‘Joburg Pride’ over the past seven years. The voluntary winding up of JGPFC  was decided by an unanimous resolution at a board meeting held on Wednesday, 13 March 2013, and so the Joburg Gay Pride Festival Company will cease operation from 26 April 2013.

“It was a very big decision, and one that didn’t come easily,” says board member Samantha Durkin. “We have been successfully running Joburg Pride for the past seven years, growing it from a one-day event that attracted a few thousand participants into a multifaceted event over three days, including an evening program, which has been attracting crowds of more than 20,000. It became increasingly time-demanding and operationally complicated over the past few years, especially as it’s been run by a board of volunteers who’ve contributed their skills, time, networks and contacts, with virtually all of Joburg Pride’s planning taking place after hours. Looking back, we have a lot to be proud of, as we’ve supported the work of a number of worthy causes and charities over the years and have enjoyed the support of the local and international LGBTI community, as well as the support of great local and international artists, and greatly-appreci­ated sponsorship from a number of blue chip companies.”

“Joburg Pride been a passion project for each of our volunteer board members,” says De Stefanis. “It’s been our way to try to help unite a very diverse LGBTI community, while building an annual event designed to have far-reaching positive impact on Johannesburg’s tourism and entertainment industries and showcasing the ground-breaking­ work by South Africa’s burgeoning NGO, arts and culture sectors. ”

“The interruption of last year’s Joburg Pride march by the activist group 1-in-9 was also a factor in our reasoning,” says De Stefanis.

He noted that the lesbian feminist group  “1-in-9″  interruption and protest of the Pride rally, which caused a huge local and international outcry in 2012,  shifted the event from a low-risk event into a high-risk category, which would negatively impact on our operational structures and budgets going forward.

“The  protest against pride provided great short-term publicity for 1-in-9, but created far-reaching negative publicity for Joburg Pride. It’s ironic, as we agreed with their message – but not their medium, as it obviously negated our work over the past seven years, while providing a hint of potential operational and security risks – something we’ve always been prepared for, but never had to previously deal with on such a scale. Ultimately, all of these factors combined would impact on the time and financial limitations of the board. We assessed the financial and security risks against our collective personal obligation to produce a safe and inclusive event that’s also creatively rewarding and financially viable – something that Africa’s powerhouse, Johannesburg, certainly deserves. After careful consideration we are, unfortunately, unable to guarantee meeting those obligations in the future.”  says De Stefanis.

Johannesburg Pride had been accused of failure to be fully inclusive and for those who now see this as the fall of the event because of such, should perhaps contemplate a resurgence of Pride or reformation in a political vein that makes sense.  It is a great shame on many levels that this event is not going to happen.  I would hope that some organizations find a way to create a rally in its place, at the very least to tackle the problems of increasing homophobia, violence against gays, lesbian and transgender people and backlashes against a supposedly all inclusive constitution.

READ More on the genesis of this decision – http://oblogdeeoblogda.me/?s=Johannesburg+Pride&submit=Search

South African lesbian feminists called for a pause, a minute of silence at the Johannesburg  (Joburg) Gay Pride Parade, to remember lesbians and LGBTI victims of homophobic murders,  yet were denied their moment by Pride organizers. A group calling themselves One in Nine chanted “one minute of silence” and then lay down along the route, singing songs noting oppression and the fight for visibility to end homophobia.  http://oblogdeeoblogda.me/2012/10/07/lesbian-group-disrupts-johannesburg-lgbti-pride-parade/

10 thoughts on “Johannesburg Gay Pride Cancelled as Board Dissolves”