After I published an article outing the journalists, owners, management, and editors from the Ugandan Tabloid RED PEPPER,  for their persecution of LGBTI Ugandans, through outing gays in their Tabloid print magazine, members of the group, numbered 1 through 12, below, launched into the obvious and expected attack on me.

They commented on my BLOG, hurled Tweets between each other, sent me private e-mails and of course posted a response on  one of their own Blogs.

However what is always shocking is the revelation of the vicious hate which some have expressed, serving only as further evidence of the intent to persecute.

The contradictions are palpable, as on the one hand the Red Pepper Persecutors defend themselves by denying that Ugandan gays are persecuted at all and in the next breathe they launch into tirades of hate like the one I am showing in this screen shot below, where Ggazzaman Kodili seems to threaten my life:- 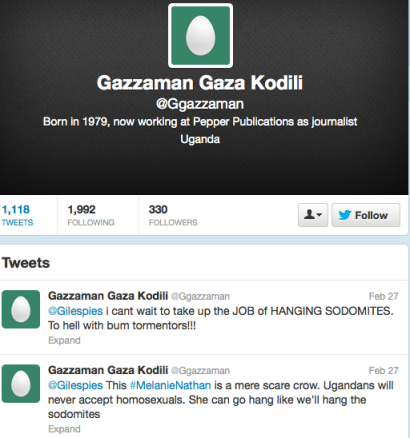 Now that we have years of proof of the persecution of  LGBTI Ugandans, recounting how they were first outed by Red Pepper and then suffered directly after the exposure, we are able to point the finger directly back at the odious publishers and call them persecutors:-

Blaming the Victim – What comes first the persecution or the defense:-

No 2. Arinaitwe Rugyendo on my Red Pepper Persecutor list wrote a Blog piece in which he denies that Gays in Uganda are persecuted and launches into an argument that the Colonialists in the form of Melanie Nathan and LGBT activists are riding in from the West to launch a new wave Colonialism, by bringing homosexuality to Africa, only to contradict himself later in his piece with a myriad of admissions.  Of course he is right about one thing – the Colonialists did indeed ride in from the West. However, they were not in the form of yours truly, but rather in the form of Christian Evangelicals Scott Lively and Lou Engle who brought hatred from the West under guise of (Colonial) Christianity, asserting that homosexuals where responsible for the Holocaust and that if Uganda did not implement harsher laws to tackle homosexuality, such as putting them to death, then Uganda would fall like Sodom and Gemorah!

Had it not been for our Neo-colonial heroes Lively, et al, homosexuality would probably still be a sleepy taboo in Uganda that no one much cared about. But now we from the West, who happen to be human rights defenders of a post-holocaust generation, which dictated “never again,” operate in a world much larger, by virtue of cyber visibility; and so we are not quiet when we see our brothers, sisters and gender free siblings stomped on through scape-goating and persecution, which smacks a fingerprint of western hatred, so exported.

My piece is therefore inspired by a gay-leaning blog post by a one Nathan Melanie (see details here ) in which she lists me and others as gay persecutors who should be tried at the International Criminal Court, banned from traveling to any country outside Uganda and hopeless stuff like that; essentially exhibiting the kind of grotesque intolerance she’s accusing us of.Initially, my friends, Pastor Martin Ssempa and the chimpreports.com Managing Editor, Giles Muhame restrained me from responding to this scathing attack. I resisted. I resisted because I feel this recurrent, stupid and rotten neo-colonial assault on the Africans must be virulently fought with vigor, rigor and depth by our new generation. It is important to put into context why we have characters like these who have no knowledge of our value systems, have no regard for debate with Africans but continue using cyber space unchallenged to preach to Africans on how they should run their affairs and who they should sleep with and how.

What is irritating very many Ugandans and indeed many other Africans elsewhere is that these colonial agents passing off as pro-gay campaigners are deliberately ignoring this vital piece of information in order to further their sponsored neo colonial agenda on the African continent labeling all of us homophobic, when historically and even now, we have never been. The other irritation has been the glorification and promotion of this behaviour animated by their local collaborators who peddle lies in western cities claiming persecution.”

No 2. makes the case for me, when he notes that homosexuality existed in Uganda long before we the human rights defenders came along. But instead of blaming its reawakening on the haters (Lively), he has blamed it on the defenders (LGBT acitivsts)  who came to defend gays after the Western haters had done their dirty deed and left town in the hands of the Ugandan inheritors of Colonial Christian hate, who No 2 describes (above) as his friends, notorious hater and homosexuality possessed  ‘poo poo Pastor Martin Ssempa’ and ‘Hang the Gays via Rolling Stone tabloid’ Giles Muhame.   (Nice Company No. 2 Rugyendo keeps.)  He says and I am grateful for the admission:

“This is the narrative that the pro-gay groups in the Western world continue to propagate. They derogatorily label all countries that look at homosexuality as being contradictory to their rich heritage, homophobic. They abuse their institutions with impunity and call them homophobic and traditional.  Yet, with all the research, the computers, their intelligence systems and information freely available to them, they deliberately ignore one vital thread of information. This is that homosexuality has actually existed in Africa for centuries. In my native Nkore region of Western Uganda, homosexuals have a noun. We call them ‘Ebitingwa,’ derevied from ‘Okutinga’, which means ‘to sodomise.’ This word existed in Runyankore, the local language spoken in Nkore, not because it was imported. It exists because it refers to a sexual activity that has been widely known to have and still exists in that part of Africa. The difference between us and these colonialists, and their modern agents, is that we did not glorify it. We did not even harass or talk about them. They remained in their reclusiveness as long as they did not disturb or attempt to disturb the others. “

Yes Homosexuality is not Un-African as your Parliamentarians would assert.  We agree on so many aspects of the myth – however the bottom line is that No 2. et al  at Red Pepper know the harm they are causing given the admissions made and the only point of disagreement seems to be what came first the hater or the defender?  The answer to that question determines the right of the international community to defend as an attempt to undo the harm of Colonialists.  You tube and the tabling of the Anti-Homosexuality Bill provides the clear record for the order of events.  Some nerve when No 2. says:-

“But the pro-gay groups and their local traitors should stop creating a storm out {in} of a teacup, debate soberly and stop blackmailing the people of Uganda.”

Perhaps our holier than thou, No 2.,  Arinaitwe Rugyendo, should point the finger right back at himself and his ilk, and consider what it takes for a level playing field.  How disingenuous of the persecutor; as clearly by OUTING those who he calls “traitors” (even by virtue of his nomenclature) he is doing anything but allowing for an environment that would foster, encourage or promote sober debate; by placing pictures such as the one on the left, he is fueling the fire of hate, while purporting to suggest that balanced argument is even a possibility, while in truth he is the one who has perpetuated the very hostile milieu that he pretends is not there.