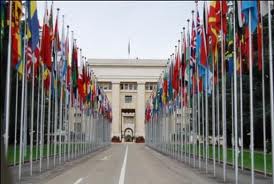 For us in the USA, “gay rights” is associated with the debate over equality and is about whether LGBTI people should be allowed to marry, adopt, serve in the military, be subject to baseless firing from jobs. Yet others in the World are caught up in the fight for their lives, as sexuality has been criminalized in many Countries; persecuting those who are not heterosexual and who happen to have a same-gender sexual orientation.

Now as the UN is set to discuss a November report on the issue, Muslim Groups have come out against LGBT rights to sexual orientation as a human right.

In other words you have a right to be heterosexual but you do not have a right to be homosexual. The human right does not apply, as many uneducated or religiously biased countries, politicians, organizations instead base homosexuality on a sexual act and not on relationship whereas heterosexuality seems to enjoy its definition ensconced in the context of relationship rather than in the act of sex!

The fight for the right to life as a gay person is escalating in Africa and also persists in Arab and Muslim countries around the world. The United Nations is taking the matter seriously and while the debate is on, many of us feel the Report speaks for itself and that there is no time for debate, just time for action as many of our LGBTI brothers and sisters around the world continue to suffer persecution.

James Kirchick, a fellow with the Foundation for Defense of Democracies, and contributing editor to the New Republic and to World Affairs Journal, wrote a piece in WAPO about the United Nations discussions tomorrow-  on the question of whether gays should enjoy the basic right to life.

“On Wednesday the U.N. Human Rights Council in Geneva is to discuss the recommendations of a November report surveying the discrimination and abuse — often state-sponsored — that gay people endure around the world. The findings are chilling: Some 680 transgender people were murdered in 50 countries between 2008 and 2011; 76 countries classify homosexuality as a crime, and at least five of those apply the death penalty. Even those who disapprove of homosexuality on religious grounds are unlikely to object to the report’s anodyne recommendations: that governments should decriminalize homosexuality, work to prevent violence against gays and recognize sexual orientation as a valid cause for asylum.”

He mentions that not everyone welcomes the report’s conclusions and that the most intense opposition has come from the Organization of Islamic Cooperation, a group of 57 Muslim states.

“We note with concern the attempts to create controversial ‘new notions’ or ‘new standards’ by misinterpreting the Universal Declaration of Human Rights and international treaties to include such notions that were never articulated or agreed to by the U.N. membership,” Zamir Akram, Pakistan’s ambassador to the U.N. office in Geneva, wrote to the president of the Human Rights Council on the Muslim organization’s behalf.”

Akram referred to homosexuality as “personal behavior and preferences,” reducing the emotional identity of gays to the performance of sexual acts.

The article notes, “This is not only offensive to the dignity of gays but also obscures the oppression faced by many, which often has nothing to do with sexual behavior. A bill before the Ugandan legislature, for instance, seeks to punish those who know gay individuals and do not report them to police.”

The Ugandan Anti-Homosexuality Bill also seeks to prevent the so called “promotion of Homosexuality,” which ill-defined  could result in the closure of all LGBT related NGO’s and civil societies which seek to provide services to gay and lesbian people on so many different issues, including health care related.

The WAPO article goes on to state:

“The Muslim group argues that legally protecting gays from violence would foist “new standards” on the world. In fact, it would simply clarify that governments respect the standards articulated in the very same Universal Declaration of Human Rights that Akram cited. The declaration says that all individuals­ are guaranteed “the right to be free from torture, arbitrary arrest and detention, the right to be free from discrimination and the right to freedom of expression, association and peaceful assembly.”

That “sexual orientation” is not specified does not grant governments license to oppress homosexuals or permit violence against them. The November U.N. report notes, “The specific grounds of discrimination referred to in the International Covenant on Civil and Political Rights,” to which most countries in the Muslim group are signatories, “and other human rights treaties are not exhaustive.”

Akram also wrote: “We are even more disturbed at the attempt to focus on certain persons on the grounds of their abnormal sexual behavior, while not focusing on the glaring instances of intolerance and discrimination in various parts of the world, be it on the basis of color, race, gender or religion.” It is indeed a pity that the United Nations does not call more attention to those who face discrimination because of their color, race, gender or religion. But a Muslim group whose members include some of the world’s most repressive regimes has little standing on that score. “

LGBT groups and activists from around the world are watching the outcome of this week’s discussions, as we call for the decriminalization of homosexuality, worldwide, and watch in horror as persecution against our brothers and sisters continue each and every day.

Just this week we hear from IGLHRC about the 40 Iraqi LGBTI people who have been kidnapped and tortured and possibly murdered by Militia in Iraq. Ten women have been arrested in Cameroon on “suspicion” of being lesbian.

Two articles on this BLOG reporting this week’s news:-