If you know who Harvey Milk is but do not know who Sally Miller Gearhart is – then you are a victim of the impact of lesbian erasure. Read on and erase the injustice – you can participate in this important correction.

Not only have lesbians suffered taking a back seat to gay men in the trajectory of LGBTQI visibility and the equality movement, for decades, but we have often been denied our existence at great cost to our visibility and influence. And this has occurred even when we transcended the men and took the lead. It is up to us to claim our place and ensure that we as lesbians are well documented for our place in OURtory/ herstory!

A perfect example of this is the story of SALLY MILLER GEARHART, Feminist, Lesbian & Gay rights activist, and fantasy author:

In the film MILK, for which gay man Dustin Lance Black (DLB) won an Oscar, Sally (and all of us as a result) suffered a grave injustice. Not only did DLB’s script exclude Sally from her place in history, but some of what she did was attributed to Harvey Milk, in her stead…. This hurt her feelings and pissed her off –  not because of any ego – because of the aspect of lesbian erasure – and she told me that herself, yet graciously never said a word publicly.

Sally expressed the upset at her exclusion in an interview which I was involved in several years ago.  When I went to look at actual archival footage of the TV broadcast with Harvey Milk and Sally debating Briggs over the BRIGGS initiative, that sought to ban gay teachers from schools, DLB stole Sally’s lines from the actual debate and scripted her words to Harvey Milk. The script and production resulted in an academy award for the film MILK. Imagine – the opportunity for fair and equities visibility slaughtered in mere lines.   Sally’s voice was entirely erased. I was so outraged and so I wrote this article in the Advocate:
WHEN HARVEY MET SALLY :
https://www.advocate.com/commentary/2013/02/07/op-ed-whats-missing-when-harvey-met-sally  –  and another version of the same article in LGBTQ Nation: https://www.lgbtqnation.com/2013/02/when-harvey-met-sally/
THE OPPORTUNITY TO REVIVE SALLY’S and all our VISIBILITY: 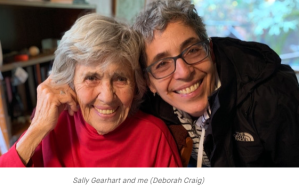 At last a film:  Deborah Craig and a team of filmmakers are in the midst of making a documentary about the life of Sally Miller Gearhart. It is so important for us lesbians to expound Sally’s legacy and her importance reflects on us all.

With several years of passion and vigor Deborah is now helming a fund raising push to bring this documentary to completion. Many of us want to see this film made with its popularity evidenced by $30,000 raised in a mere 48 hours. With your help the remaining $20,000 will make a huge dent into its completion.

On Sunday the team held a Zoom Fundraiser where we saw a clip from the film giving us a taste of what is to come. A worthy watch and discussion here: https://www.crowdcast.io/e/SallyGearhartDoc/1

This is a film elucidates so many pertinent issues  – reflecting on Sally’s exuberant personality, her ageless antics, extraordinary legacy and much more –  from the ideals of feminist separatism, lesbian life on women’s land, lesbians birthing boys, women’s relationships and their complexities, to political issues of the day. And it all leads to the critical importance of the documenting of our lesbian history.