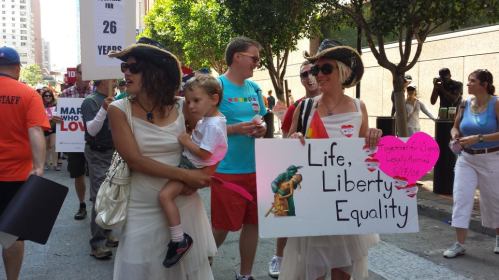 Over 120 LGBTQI organizations signed the below letter addressed to all United States Senators, opposing the confirmation of Judge Amy Coney Barrett to the Supreme Court of the United States (SCOTUS) as the replacement for Justice Ruth Bader Ginsberg. African Human Rights Coalition is a proud signatory to the letter, noting the huge impact that the likely Trump nominee will impose on our rights as LGBTQI individuals and communities. In addition to specific issues we note – “LGBTQ people have an enormous stake in the same core issues that affect so many other Americans— from voting rights and immigration to policing and reproductive justice. These issues affect LGBTQ communities, which include people of color, immigrants and refugees, elders, youth, parents, incarcerated persons, people with disabilities, and many people living in poverty.”

Thank you to all who participated and to Human Rights Campaign HRC for taking the lead and their significant collaboration with all provided an opportunity for specific input.

Here is the Letter and participating organizations:

On behalf of the undersigned organizations, we write to you today to express the importance of the U.S. Supreme Court to lesbian, gay, bisexual, transgender, and queer (LGBTQ) people and people living with HIV, and urge you to vote against confirming Judge Amy Coney Barrett as a justice of the Court. Judge Barrett’s approach to issues like privacy, equal protection, and religious liberty will shape the Court in ways that may cause lasting harm to LGBTQ people and other vulnerable groups.

Judge Barrett will replace Justice Ruth Bader Ginsburg if confirmed. During Justice Ginsburg’s tenure on the Supreme Court, she consistently authored or joined opinions in cases that safeguarded the liberty and equality of LGBTQ people, including ​Lawrence v. Texas​, which struck down laws criminalizing same-sex sexual relationships; ​Christian Legal Society v. Martinez,​ which held that public universities may enforce neutral, generally applicable policies prohibiting discrimination based on sexual orientation; ​United States v. Windsor​, which guaranteed equal treatment of the marriages of same-sex couples by the federal government; Obergefell v. Hodges​, which ensured the right of same-sex couples to marry nationwide; and most recently, ​Bostock v. Clayton County​, which found that Title VII of the Civil Rights Act of 1964 prohibits discrimination based on sexual orientation and gender identity. While these opinions have transformed the place of LGBTQ people in this country, we have not yet achieved full legal equality. Many unresolved issues affecting LGBTQ people are still being litigated in the federal courts and, unfortunately, we still face a concerted effort not only to roll back existing protections, but to enact laws and policies that actively target LGBTQ people and seek to make it impossible for them to participate safely or openly in the shared life of this country.

The Supreme Court has long recognized and protected the right to religious belief and free exercise as core American values. However, it has also been very clear that these values must not be exercised, “in utter disregard of the clear constitutional rights of other citizens.”1​ ​It is essential that the nominee respect this standard. The Court will take up this issue next month in Fulton v. City of Philadelphia. T​ he issue presented by the case–whether a federally funded religiously affiliated child welfare agency must comply with generally applicable nondiscrimination laws when performing a governmental function–could undermine the enforcement of nondiscrimination protections in wide spectrum of areas, including veteran’s services, public accommodations, public benefits, family law, asylum, and housing. Even whether same-sex spouses must be treated equally is at stake, including pending cases regarding the equal application of citizenship rules to children born abroad to same-sex couples. Were the Court to permit these inequalities to stand, Justice Ginsburg’s fear of a kind of “skim milk” equality may well be realized.

Similarly, despite ​Bostock’s​ clear holding that a prohibition on sex discrimination necessarily protects LGBTQ people, the current administration is disregarding and actively seeking to undermine that landmark ruling. Less than a week after the Court’s decision in ​care protections for LGBTQ people under the Affordable Care Act, which is already the subject of federal litigation. And of course, the ACA itself has been challenged, in a case that is already before the Court and will be heard one week after the election.

There are many other federal policies targeting LGBTQ people that are likely to be challenged in the federal courts in cases that may ultimately reach the high Court. The Department of Housing and Urban Development has proposed a rule that would empower federally funded emergency shelters to exclude transgender people. The Department of Education has stated that federal law does not prohibit discrimination against transgender students and has even taken the extraordinary step of seeking to withdraw federal funding from schools that protect those students in their athletic programs. And there already are multiple federal lawsuits challenging President Trump’s decision to ban transgender people from military service.

In addition to these examples, LGBTQI people have an enormous stake in the same core issues that affect so many other Americans— from voting rights and immigration to policing and reproductive justice. These issues affect LGBTQ communities, which include people of color, immigrants and refugees, elders, youth, parents, incarcerated persons, people with disabilities, and many people living in poverty. Justice Ginsburg championed a broad and robust application of our nation’s civil rights statutes and our Constitution’s guarantee of equal protection of the laws. She was a champion of racial justice, reproductive rights, voting rights, and immigrant justice. These issues will continue to come before the court, as will questions of executive power and privilege, corporate personhood and political activity, and access to the ballot and public life.

With all that is at stake for LGBTQ people, we urge you to take seriously your responsibility to ensure that the Supreme Court remains a forum that is genuinely open to all, committed to the principles of equality and justice for all, and a bulwark against tyranny, the scapegoating of vulnerable groups, and the abuse of public power. As Judge Barrett has acknowledged, she embraces a conservative judicial philosophy that aligns her with former Justice Scalia, one of the most conservative justices ever to sit on our nation’s high court, and one who consistently voted against LGBTQ people in every LGBT rights case decided by the Court during his tenure. Her presence on the Court would change the current balance of the Court dramatically, in ways that are highly likely to cause lasting harm to LGBTQ people and other vulnerable groups. We urge you to oppose Judge Barrett and vote no on her confirmation.

Thank you for your consideration.

HERE IS THE LAWYER FOR GOOD GOVERNMENT LETTER WHICH I SIGNED AS WELL, IN MY PERSONAL CAPACITY, as well as Video message participation: 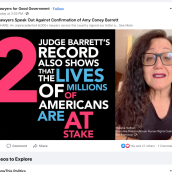 Judge Amy Coney Barrett has officially been approved by the Senate Judiciary Committee. We need to make sure that every American knows that the legal community is vigorously opposed to this nomination. More than 7,000 lawyers have now signed this letter, which is the largest attorney opposition letter to a Supreme Court nominee in American …
END_OF_DOCUMENT_TOKEN_TO_BE_REPLACED