With the Men Perceived as LGBTI – All said and done if ever there is a case exposing the exploitation of criminalization of gay people, they is that case. It is time for all countries to decriminalize sexuality and gender identity.

On May 20, I reported in an article entitled, “Ugandan LGBTI Detainees Released from Prison after 49 Days of Hell and Torture” about 19 young men from the Children of the Sun Foundation (COSF), who had spent 49 days of hell and torture in Kitalya Prison, Uganda, where they were denied the right to lawyer visits and experienced horrendous torture at the hands of Police. The beatings and cruel treatment commenced with a raid headed by the Chairman of the local council of the area, who himself was recorded beating the young men, on Video. After a lengthy battle in the Court and the subsequent dropping of all charges, the young men were released from prison and the reports of the severe beatings and torture have now lead to charges.

The Chief Magistrates Court of Wakiso has issued criminal summons to the Chairman Local Council III of Kyengera Town Council, Hajj Abdul Kiyimba and Prisons Officer Philimon Woniala to answer charges of torture and inhuman and degrading treatment meted out against the COSF-20. This is in criminal Case No. 505 of 2020. The charges have been made under section 12(1)(c) and 12(3 of the Prevention and Control of Torture Act, 2012 which allows private individuals to institute criminal cases against officials accused of torture. We first reported the case to the Police but they were reluctant to take it on forcing us to institute private proceedings. 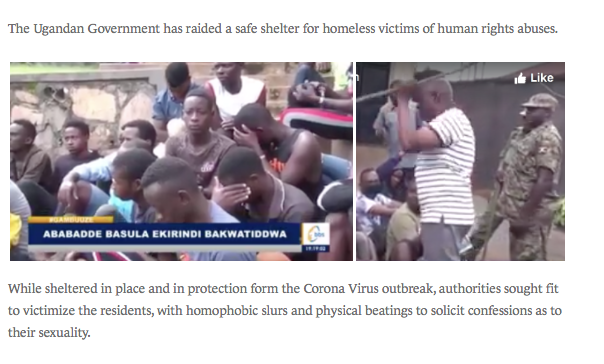 The issuance of criminal summons indicates that the magistrate is satisfied that the applicants have a prima facie case against the accused persons and that the accusations are not frivolous or vexatious. 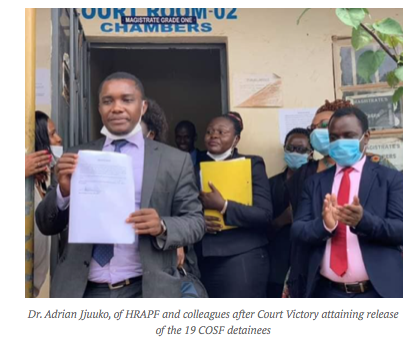 The Human Rights organization  HRAPF is spearheading the work on behalf of COSF and the young men:   In response to HRAPF’s formal compliant to the Commissioner General of Prisons about the actions of PO Woniala, the Attorney General wrote, stating that the government takes allegations of torture seriously and that investigations are ongoing. HRAPF looks forward to an update in this regard.
The current civil case against Kiyimba, Woniala and the state is also up for hearing on 23rd September 2020. 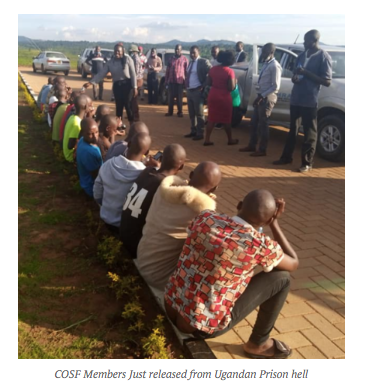 The case which includes 20 young men ought to result in favorable decisions for the the COSF 20, as evidence is abundant. African Human Rights Coalition, which I direct, under the guidance of Marc Cohen, our Director of Humanitarian Affairs, has helped to support the COSF shelter for young homeless men, together with other organizations, and we are all hoping for positive outcomes. The young men are suffering severely from this torture and there must be justice.  We believe that because the men are perceived as LGBTQI, the accused Chairman and Prisons Officer and others who may torture, believe they can get away with such acts with impunity. It is time to set an example. That even though LGBTI people are criminalized under the Penal Codes of Uganda, there is no exception or excuse to torture any individual under any circumstances. We also believe that the arrests of the men were unwarranted and without cause. They were NOT arrested for being LGBTQI, yet if they were not perceived as such, they would not have been targets for arrest at all.   All said and done if ever there is a case exposing the exploitation of criminalization of gay people, they is that case. It is time for all countries to decriminalize sexuality and gender identity. All it does is impinge upon basic freedoms and human rights.

Nineteen young men from the Children of the Sun Foundation (COSF), spent 49 days of hell and torture in Kitalya Prison, Uganda, where they were denied the right to lawyer visits. We now know why: As the young men emerged from the prison this week, after a lengthy battle in the Court and the subsequent … END_OF_DOCUMENT_TOKEN_TO_BE_REPLACED

AND CALLS FOR ACTION Today, after a lengthy Court battle to attain access to detained clients, the Ugandan Prisons authorities gave  HRAPF’s legal advocates unfettered access to the COSF-19 at Kitalya Mini Maxi Prison. The group were arrested after Ugandan police opportunistically used the COVID-19 emergency to target gays in its ongoing persecutory hunt of … END_OF_DOCUMENT_TOKEN_TO_BE_REPLACED

Further to our reporting on the case against the COSF-19 where on Friday 24th April 2020, Human Rights Awareness and Promotion Forum (HRAPF) filed a case before the Civil Division of the High Court of Uganda challenging the denial of the 19 LGBT persons currently on remand at Kitalya Mini Maxi Prison access to their … END_OF_DOCUMENT_TOKEN_TO_BE_REPLACED

STATEMENT ON THE RAID OF THE CHILDREN OF THE SUN FOUNDATION SHELTER FOR LGBT YOUTHS IN UGANDA- 3/31/2020 Introduction and overview On the morning of 29th March, a shelter for LGBT youth operated by Children of the Sun Foundations (COSF) was raided by residents, and security forces. 23 people found at the shelter were arrested. … END_OF_DOCUMENT_TOKEN_TO_BE_REPLACED

The Ugandan Government has raided a safe shelter for homeless victims of human rights abuses. While sheltered in place and in protection form the Corona Virus outbreak, authorities sought fit to victimize the residents, with homophobic slurs and physical beatings to solicit confessions as to their sexuality. At this time we believe approximately 23 people … END_OF_DOCUMENT_TOKEN_TO_BE_REPLACED