All in the name of a photo-op for The Liar In Chief!  Here are the Republicans in the House who fell into the trap of Donald needing a win!  Some did not even bother to read the Bill before voting on it!

Yesterday 217 House Republicans successfully voted to take away health care from millions of Americans. Though succeeding by a small margin, the insidious Bill seemed to serve Donald Trump’s desire for a ‘biggley’ brag and so while Republicans did a victory lap around the White House Rose Garden many of us with pre-existing conditions mourned our impending doom.  Now its off to the Senate where it will be met, hopefully, with the appropriate resistance. Maybe some Republican ‘electeds’ actually care!

Because of a these privileged, reckless heartless elected representatives, the ObamaCare Repeal Bill can take away insurance coverage for at least 24 million Americans, increases costs, and eliminates protections – while lavishing hundreds of billions in tax cuts on the wealthiest Americans.

As stated by my Congressman Jared Huffman (D-CA) –

“I voted no on this bill, and I would do it again a thousand times. This is not healthcare reform; it’s ripping health insurance from millions of struggling families in order to cut taxes for the richest families in the country. It allows governors to waive requirements for essential health benefits, which means insurers in those states can go back to denying coverage based on pre-existing conditions.

This is just wrong. House Republicans made this very partisan – they didn’t have a single conversation with any Democrat about improving the Affordable Care Act. Rather, they worked behind closed doors and then jammed through, in a single vote, a terrible bill that undoes almost a decade of progress. And they did it to score political points with the most extreme (and wealthiest) elements of their base, flouting the interests of everyone else. Despicable.

There must be a political price to pay for this partisan recklessness. Americans have already made endless calls, tweets, and emails urging their representatives to protect their health care. They have filled town halls nationwide, even holding their own “empty chair” events when their Republican representatives ducked.

While 20 House Republicans voted the right way on this bill, 217 of their colleagues failed the American people today.

Now we must make sure the Senate kills this terrible bill. And that means showing Senators that those who flout the American people will be voted out of office.

Calls and marches are important to hold our leaders accountable, but ultimately if we want to save health care protections, we’re going to have to change Congress.

House Republicans didn’t even wait for a full assessment of cost from the Congressional Budget Office. Instead, they rammed the vote through Congress with minimal debate. They didn’t want to know what this bill means for the economy or for families who will lose their insurance. Yet they keep spinning and, frankly, lying about it. Just this weekend President Trump falsely claimed that TrumpCare would protect people with pre-existing conditions. It does the exact opposite.

I am hopeful that TrumpCare will fail once it reaches the Senate, but that won’t just happen naturally. We must make sure Senators hear the voices of the American people.

To add insult to injury most Republicans and staffers apparently did not even read the Bill in its entirety.

Here are the 24 Republicans who are likely to lose their seats – be sure to keep an eye on their campaigns in particular as they attempt reelection come next elections: 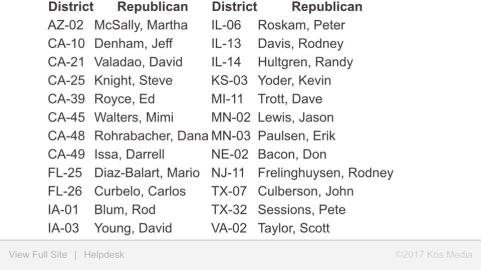 And here are the Republicans who had the courage to vote wit h the Democrats: